Doctor, my skin is turning white! What is Vitiligo (hypopigmentation) and how to treat it? 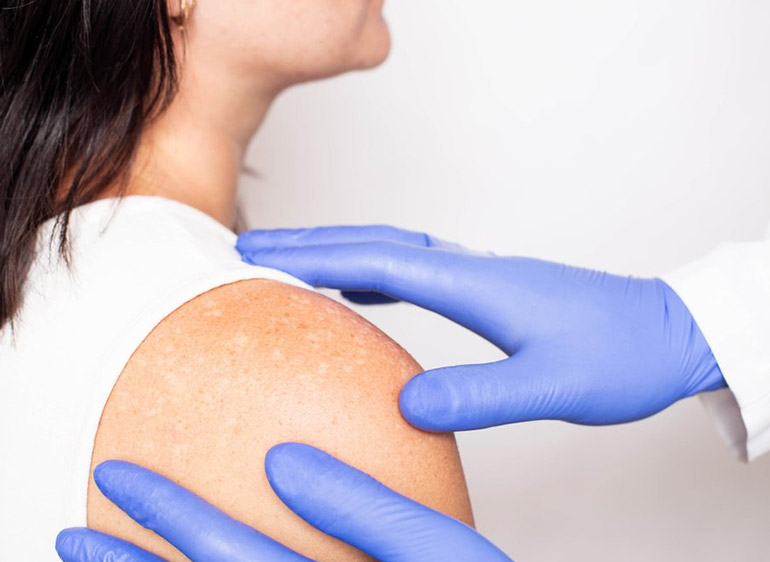 Doctor, my skin is turning white! What is Vitiligo (hypopigmentation) and how to treat it?

The skin is the largest organ of the human body and is comprised of the epidermis, dermis and subcutaneous fat. The epidermis consists of keratinocytes, melanocytes, Langerhans cells and Merkel cells. The melanocyte is the sole pigment producing cell of the skin. Melanocytes produce melanin within small cellular organelles called melanosomes. Melasonomes transfer their melanin to overlying keratinocytes, which migrate from the basal layer of the epidermis to the stratum corneum where they are desquamated into the environment. Differences in innate skin colour are determined by the size and number of melanosomes, not the number of melanocytes. In other words, the number of melanocytes in the epidermis is the same irrespective of an individual’s race.

Here, we let’s review – Vitiligo, the most common disorder of hypopigmentation seen in everyday office practice.

Vitiligo is a common acquired pigment disorder characterized by a complete loss of functional epidermal melanocytes. It presents with areas of progressive depigmentation involving the skin, hair or mucosa.

Vitiligo is the most prevalent pigmentary disorder in the world, with an incidence between 0.1% and 2%. It is believed that this incidence is higher among those with pigmented skin.

Vitiligo can be classified into two major clinical subtypes: Segmental and Non-segmental

Be informed about these treatment options:

The diagnosis of vitiligo is mostly clinical, however a Wood’s lamp examination can accentuate affected skin and help confirm the diagnosis. The differential diagnosis includes pityriasis versciolor, pityriasis alba, piebaldism and idiopathic guttate hypomelanosis. The treatment of vitiligo generally falls into the categories of non-medicinal (sun protection and camouflage agents) and medicinal (repigmentation and depigmentation therapies). Although vitiligo is resistant to all forms of skin cancer, it is still subject to sunburn from excess sun.

For localized vitiligo, potent topical steroids are the most commonly used first-line treatment, with reported repigmentation rates of 45% over three to six months of treatment. Topical calcineurin inhibitors are steroid-sparing immunomodulators that are also commonly used for the treatment of localized disease, especially on the face and neck.

Phototherapy options for vitiligo include narrowband ultraviolet B therapy and the 308-nm excimer laser (a focused ultraviolet B device). Photochemotherapy refers to the use of a topical or oral photosensitizing agent (such as psoralen) with ultraviolet A therapy.

Phototherapy and photochemotherapy are used for patients with extensive disease but are not readily available in all locales and require a time commitment of two to three visits per week over several weeks.

Surgical grafting is not performed in routine practice.

For patients with extensive, recalcitrant disease, depigmentation topical therapy with 20% monobenzyl ether of hydroquinone twice daily over several months can be used to create diffuse depigmentation that may be more cosmetically acceptable for patients centrifugally. Spontaneous repigmentation has been reported to occur in 10% to 20% of patients. The lack of melanocytes precludes the development of melanoma skin cancer within vitiligo patches. And despite the lack of protective melanin, patches of vitiligo are remarkably resistant to the development of non-melanoma skin cancers— which are not derived from melanocytes—such as basal cell carcinoma and squamous cell carcinoma.